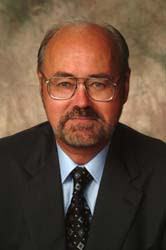 The conservatives in the US begin to think more seriously about evolutionary theory and evolutionary psychology. (New York Times, [whole page]), one of the proponents is Larry Arnhart (photo on the left). The titel of his book is "Darwinian Conservatism". (Amazon)
... Some of these thinkers have gone one step further, arguing that Darwin’s scientific theories about the evolution of species can be applied to today’s patterns of human behavior, and that natural selection can provide support for many bedrock conservative ideas, like traditional social roles for men and women, free-market capitalism and governmental checks and balances.

“I do indeed believe conservatives need Charles Darwin,” said Larry Arnhart, a professor of political science at Northern Illinois University in DeKalb, who has spearheaded the cause. “The intellectual vitality of conservatism in the 21st century will depend on the success of conservatives in appealing to advances in the biology of human nature as confirming conservative thought.”

The fledgling field of evolutionary psychology also spurred some conservatives to invoke Darwinism in the 1990s. In “The Moral Sense” (1993), followed by “The Marriage Problem: How Our Culture Has Weakened Families” (2002), James Q. Wilson used evolution to explain the genesis of morality and to support traditional family and sex roles. Conservative thinkers from Francis Fukuyama to Richard Pipes have drawn on evolutionary psychology to support ideas like a natural human desire for private property and a biological basis for morality.

Mr. Arnhart, in his 2005 book, “Darwinian Conservatism,” tackled the issue of conservatism’s compatibility with evolutionary theory head on, saying Darwinists and conservatives share a similar view of human beings: they are imperfect; they have organized in male-dominated hierarchies; they have a natural instinct for accumulation and power; and their moral thought has evolved over time.

The institutions that successfully evolved to deal with this natural order were conservative ones, founded in sentiment, tradition and judgment, like limited government and a system of balances to curb unchecked power, he explains. Unlike leftists, who assume “a utopian vision of human nature” liberated from the constraints of biology, Mr. Arnhart says, conservatives assume that evolved social traditions have more wisdom than rationally planned reforms.

While Darwinism does not resolve specific policy debates, Mr. Arnhart said in an interview on Thursday, it can provide overarching guidelines. Policies that are in tune with human nature, for example, like a male military or traditional social and sex roles, he said, are more likely to succeed. He added that “moral sympathy for the suffering of fellow human beings” allows for aid to the poor, weak and ill.

As for Mr. Derbyshire, he would not say whether he thought evolutionary theory was good or bad for conservatism; the only thing that mattered was whether it was true. And, he said, if that turns out to be “bad for conservatives, then so much the worse for conservatism.”
Eingestellt von Ingo Bading um 10:32