The american-jewish Online-Magazine "Jewcy" is going further to "improve" our thinking. (Jewcy) Most important is, I think, what it is reporting about social scientist Richard Herrnstein (author of "The Bell Curve" [1994]). I don't buy the rest of the argument of the article, that the IQ of children is formed at a larger extent by "good mothers" and good "kindergartens". Not IQ - but a lot of other traits are formed by mothers (and kindergarten's) - for example social traits. I only want to give the text here to show, of what sort of dangerous ideas Steven Pinker spoke of several months ago. (Edge) The article does not mention the fact, he is speaking about the whole time, that there is not only a black-white-IQ-gap of 15 points, but also a black-ashkenazi Jews-IQ-gap of 30 points (!) (and a white-ashkenazi Jews-IQ-gap of 15 points).

"... The social scientist Richard Herrnstein disagreed. (...) A perfect meritocracy, he proposed in a seminal 1971 Atlantic article, would allow the naturally brightest to end up on top. Those bright people would pair up and produce bright children and the American meritocracy would wind up looking less democratic than aristocratic. But unlike aristocratic Europe, where inbred imbeciles like George III ended up ruling empires,modern aristocracies would be fair . Even more alarming, this new, fair aristocracy would look like a racial caste system, Herrnstein theorized, citing a study showing a 15-point gap in the average IQs of whites and blacks.

In his important 1992 book, The End of Equality, Jewish pundit Mickey Kaus cautiously came to Herrnstein’s defense. Social mobility was beginning to decline, he theorized, because a perfect meritocracy had been nearly achieved. Those groups that had what it took to move up had already moved up. Meritocracy was like a centrifuge that spun the best to the top and left the dregs on the bottom. “At some point,” Kaus wrote, “we may run out of new groups to run through the centrifuge.”

Just as Herrnstein predicted, American society has become more aristocratic. (We even have George II, a dim-witted heir, running our country.) It is tempting, then, for Jews to take up the position Herrnstein outlined in 1971, essentially defending and legitimating hierarchy. After all, anti-meritocratic policies like legacy preferences at Ivy League colleges that used to hurt Jews now help them. (...)

Though Herrnstein was Jewish, many Jews were wary of embracing a view that sounded so much like eugenics, the pseudo-science that worked to legitimate the social order back when Jews were towards the bottom. Explaining away inequality as the result of black/white IQ differences sounded like something out of 1930s Germany—not the kind of argument most Jews want to defend. But once the racial element was removed, the argument became more appealing, even flattering. Perhaps there really was something superior about us. (...) claiming to be some kind of black-haired, brown-eyed master race (...)."

The article is speaking about really, really dangerous things. But I think it is doing it not in the right way. Not with enough responsibility. For example: It does not differentiate enough between facts and "wishes". - But because there is so much speaking now about Richard Herrnstein, I have looked for photos of him. There are not so many available in the internet, I have found only two: 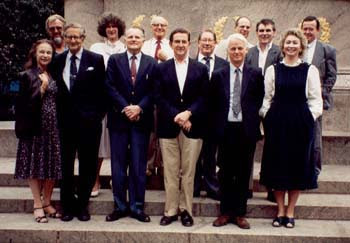 This blog was... how do I say it? Relevant!! Finally I have found something which helped me.
Thank you!